‘Distributor of the year’ industry accolade for Brammer

Brammer has walked away with one of the most prestigious awards at the inaugural Motion Control Industry Awards ceremony – Distributor of the Year.

Judged by a panel of motion control and fluid power industry experts, the awards were introduced to recognise and reward the achievements of individuals and organisations in the sector with the aim of celebrating innovation and excellence. Supported by the British Fluid Power Association (BFPA), British Fluid Power Distributors Association (BFPDA) and the British Compressed Air Society (BCAS), the awards received wide industry support and attracted a very high standard of entries. Brammer’s success in the hotly-contested Distributor of the Year category was a fitting accolade for its Fluid Power Solutions team, which this year celebrated its 15th anniversary, with the team racking up more than 600 years of combined service within the industry.

Steve Ashmore, Managing Director of Brammer UK, commented: “For the team to be recognised by their industry peers at the Motion Control Industry awards is a wonderful achievement, made all the more special as it coincides with their milestone anniversary. Although we offer an unrivalled selection of fluid power products, our philosophy focuses on much more than simply supplying a product – the added-value support services we provide to customers are the real story and were instrumental in the team’s success with this award.” 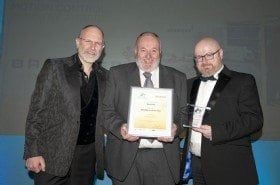 For further information about the company please visit their website: www.brammeruk.com