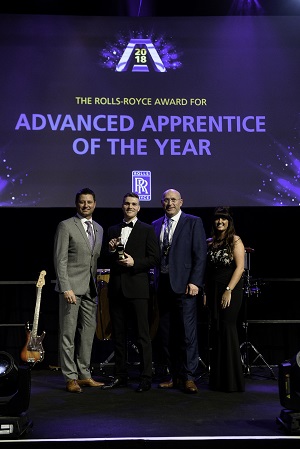 Daniel Millington of BFPA member HydraForce Ltd, the Birmingham-based manufacturer of hydraulic valves and manifold systems, has won the award for Advanced Apprentice of the Year for the UK.

The National Apprenticeship award ceremony took place at the Old Billingsgate in London at the end of November, and saw Daniel compete against eight other competitors in his field, including apprentices from companies such as BT and Royal Mail:

“I’m thrilled to have won the award. It was a huge shock and such an amazing feeling when my name was called out. I was up against some really large companies and some extremely talented apprentices, so it shows what I’ve been doing at HydraForce is really having a significant impact” commented Daniel, after receiving the Rolls-Royce sponsored award.

Photo: Daniel Millington (second from left) of HydraForce Ltd receives his Advanced Apprentice of the Year Award in November 2018

Daniel, who graduated from his advanced engineering apprenticeship this July, a year earlier than expected, won the Birmingham hosted Regional Advanced Apprenticeship Awards for the Midlands in September, which led him to be shortlisted for the Nationals:

“We are very proud of Daniel’s success at the National Awards this week and that he has received great recognition for his studies. It takes a lot of effort to work whilst simultaneously attending university, but Daniel doesn’t shy away from these challenges. He has shown that with the right attitude, commitment and hard work, you can achieve anything” said Daniel’s manager, Michael Gillbee (Manufacturing Engineering Manager at HydraForce).

After completing his apprenticeship, Daniel was promoted to position of Engineering Technician and HydraForce sponsored him when he decided to undertake his Engineering Foundation Degree. He is now in his second year of studies at Birmingham Metropolitan College, working towards full honours degree.

Daniel is also an ambassador for young apprentices throughout the Midlands, as part of the West Midlands Apprenticeship Ambassador Network (WMAAN), which helps young people to start their careers and mentors the company’s younger apprentices.

HydraForce celebrated its thirtieth year in Birmingham this year, after first being established in Chicago, USA in 1985. The Birmingham site is the European Headquarters of the business and is in its third factory since its establishment in Birmingham in 1988. It remains a privately-owned company, with manufacturing facilities across the world, including Birmingham, North America, Brazil and China. The company designs and manufactures high performance hydraulic fluid power cartridge valves, custom manifolds and electro-hydraulic controls. Growing at a rapid rate, the company has a predicted turnover of £112m for 2018.