Hydroscand: Just another day at the office with Air Force One

Lee Davis, Branch Manager and Rob Roseveare, Mobile Hose Technician from the Hydroscand Bodmin branch, were honoured to be on site at Newquay airport, providing mobile hose repair support at the G7 Summit which took place on 11-13 June 2021. 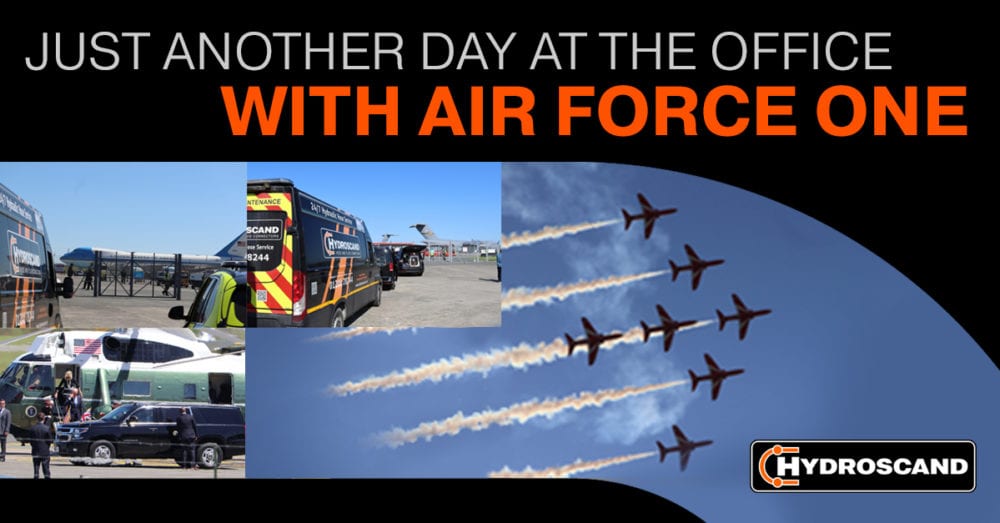 Lee said: “We were there as support for AFS Aviation ground vehicles for the event such as tugs, generators, luggage handlers, aircraft steps, forklifts and various other pieces of equipment.”

Both Lee and Rob were situated just outside the main entrance into the airfield. They had a spectacular viewing position adjacent to where Air Force One and the smaller presidential C- 32 Boeing 757 plane were parked, awaiting departure of President Biden, just on the other side of the fence about 100m away.

Lee said: “At one stage our mobile hose van was flanked by armed police on one side and the Korean military personnel the other side awaiting departure.”

“The highlight of the day was President Biden’s two Osprey helicopters, accompanying his Marine One and Two Sea King helicopters landing, and watching him exiting Marine One and being driven away in his motorcade.

“He then returned from his press meeting and passed us into the airfield to depart in his motorcade. The motorcade consisted of his amour plated Chevrolet Suburban; his electronic countermeasure Ford truck that counters IED; anti-tank guided missile and rocket propelled grenades; his private ambulance at the rear and various other vehicles filled with secret service personnel. He then boarded Air Force One and departed to meet the Queen at Windsor.”

Lee and Rob were fortunate to witness most of the VIPs and their entourage depart in  planes varying from Boeing 747 to private jets and helicopters. They witnessed the American C-17 Globemaster aircraft landing and loading up the President’s motorcade vehicles and fuel tankers to be flown back to the USA. Lee said: “This was a very impressive aircraft indeed.”

Lee added: “The five days we were present at Newquay airport went without any major issues. We were there to cover in case of any hydraulic or hose problems.

“I live across the bay from the G7 summit in Carbis Bay. It was brilliant to see the Red Arrow Air Display over St Ives Bay on Saturday evening from home with my family. This was a very special moment.”

“I consider Hydroscand, myself and Rob to be very privileged to be part of such a significant and prestigious event, the likes Cornwall will probably never see again.”