Based in Rocester, near the JCB World Headquarters, the JCB Academy is an exciting school for students from the age of 14 who are interested in business and engineering.

This unique school, which opened in September 2010, is focused on delivering high-quality engineering and business education. The school’s motto is ‘Developing engineers and business leaders for the future’ and its aim is to ensure all their students have every chance to achieve success, whether they continue into further education, or move to further learning in the world of work when they leave here.

Each year the school celebrates the successes of its students with an Awards Evening, and BFPA has been sponsoring two of these awards for several years. Chris Buxton, BFPA CEO attended this year’s Awards Evening on 21st July 2016, and presented the 2016 Manufacturing Student of the Year Award to Louise Meredith and the Achieving for Action Award to Jack Holmes for the 2015-2016 academic year. 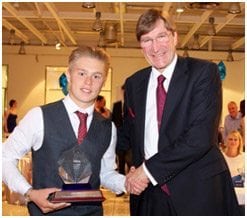