An appreciation of Professor Cliff Burrows OBE FREng, who passed away on Sunday 19 April 2020 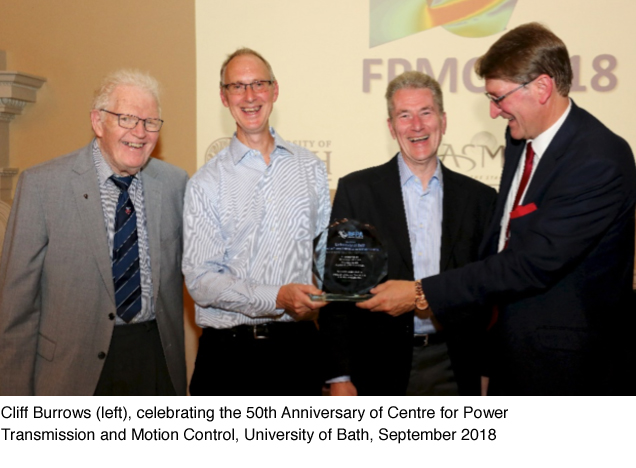 Professor Cliff Burrows helped to found the FPCE (Fluid Power Centres of Europe) in the 1990’s as a network of leading fluid power research institutes. The FPCE was one of the two groups which merged to form the GFPS in 2016. Cliff had broad interests in the dynamics and control of machine systems, and had a particular interest in fluid power going back to research on servopneumatics in the 1960’s. For many years he was one of the father figures of our fluid power community.

Cliff joined the University of Bath in 1987 as Professor of Systems Engineering and Director of the Fluid Power Centre (subsequently re-named the Centre for Power Transmission & Motion Control). In 1988, he inaugurated what is now the annual Bath/ASME Symposium on Fluid Power & Motion Control and was co-editor of its Proceedings until 2005. He was also co-founder and editor of the IMechE Proceedings Part I, Journal of Systems and Control Engineering, which remains a prominent journal for dissemination of fluid power research.

His contributions were recognised by, amongst other things: the award of a DSc in 1987; the award of the IMechE Bramah Medal in 1993; election to the Fellowship of the Royal Academy of Engineering in 1998; award of honorary doctorates from RWTH, Aachen, and the University of Aston in 2000 and 2001, respectively; and the award of the American Society of Mechanical Engineers Robert E Koski Medal in 2008. His lifetime achievements were further recognised by the award of an OBE in 2005 for services to Higher Education and to Engineering. One of his proudest days was at Buckingham Palace receiving his honour from her Majesty the Queen.

Cliff served as Head of the School of Mechanical Engineering at the University of Bath between 1990 and 1995, and as the Dean of the Faculty of Engineering for a period of five years.

He was devoted to his wife Margaret, who passed away last October, and is survived by their four children and many grandchildren. Many of us will remember Cliff as someone with a great sense of humour, and while constantly ribbing others, had the grace to enjoy a joke at his own expense. He will be missed.