Festo automation technology is being used to help STANLEY® Tools in the UK to meet continued demand for its renowned safety knives, while continuing to maintain the highest standards of safety and quality. 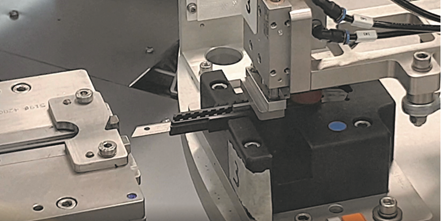 “PCE involved Festo at the earliest possible stage, which meant we could work in partnership and combine our respective specialist knowledge as system builders and automation specialists to deliver the optimum solution for Stanley Black & Decker.”

The customer required an assembly cell that could be used to produce safety knives with two different sizes of blade capable of swapping production efficiently between their 9mm and 18mm width options. To meet demand, a cycle time of 20 parts per minute was necessary. In addition, Stanley Black & Decker needed a compact solution to fit in the existing footprint at their UK production facility.

PCE Automation Ltd won the contract to design and build the new automated assembly cell under competitive tender, against international competition. In partnership with Festo, they were able to demonstrate the levels of responsiveness and aftersales support that their customer was looking for.

Their solution is an eight-station rotary assembly cell featuring Festo automation. The blade handles are held in position on the central rotary assembly and the components, including blades, are placed with high precision to build up the final product. The fully assembled STANLEY knives are subject to camera inspection for quality control as they leave the cell on a conveyor. 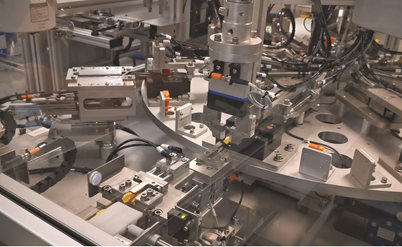 The customer did not want the assembly cell to require constant overseeing by an operator. So, hoppers are used to feed components down to vibrating bowl feeders. The hopper feeds will keep the cell running for approximately one hour without the need for operator intervention. The bespoke vibrating bowl feeders were manufactured by PCE’s sister company Premier Bowl Feeders.

Introducing the knife blades into the assembly cell raised a particular challenge for PCE. The 9mm and 18mm length blades are presented to the assembly cell in stacks of 400, but each blade is only 0.4mm or 0.5mm thick, which makes them tricky to pick and place accurately. There was a real risk of the blades jamming and halting production if not correctly positioned, so it was critical to be able to pick off one blade at a time and place it in the correct orientation. PCE used magnets to hold the blades effectively. Festo grippers are used to pick and place all the other components.

The nerve centre of the new rotary assembly cell is the Festo CPX-AP-I (see box-out), which acts as a single control network and facilitates the use of a single cable for all communications and power. It also allows flexible positioning of valve terminals and other components around the assembly cell – all of which simplifies installation and lowers overall cost. Festo DGST precision mini slides and grippers are used for accuracy and repeatability in presenting the plastic components for assembly. These are complemented by DFM guided actuators and air preparation units from Festo’s core Blue Star range of best priced and availability, pneumatics.

Ellen Blackie, Senior Project Manager, PCE Automation, comments: “As an existing Festo Integrator, we had every confidence that their product portfolio would offer the quality and precision that the STANLEY knife assembly application demanded. Breadth of product choice, coupled with Festo’s on time delivery record and parts availability, were critical in helping us win the Stanley Black & Decker contract. As a systems builder, we appreciate the proactive support that Festo offers in exploring alternative solutions. We also found their online software tools particularly helpful, especially the ability to track parts and lead-in times online.”

Festo is a member of the BFPA.

A combination of Festo DGST mini-slides, axes, cylinders and grippers are used to pick and place the STANLEY knife components with high precision and repeatability.