From its formation in 1959, AHEM* was invited to collaborate with similar trade associations overseas and this culminated in AHEM joining the newly formed CETOP (Comité Européen des Transmissions Oléohydrauliques et Pneumatiques) in 1962 during the AHEM Presidency of Francis Levetus OBE. Over the years several AHEM/BFPA Presidents have held the Presidency of CETOP including Francis Levetus, Eric Bowers, Leslie Worn and Malcolm Kelly, each time with a Secretariat. CETOP is the European Federation of Fluid Power trade associations and currently numbers 18 national associations. 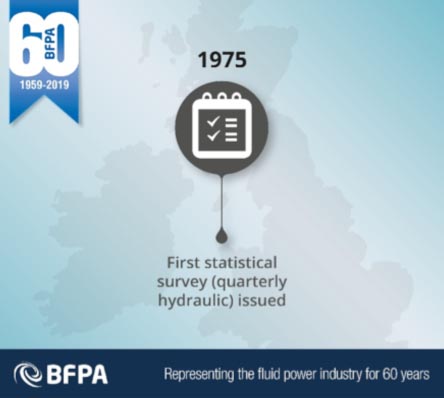 The longest running (and first launched) AHEM survey was the Hydraulic Short Term Trends Survey which was introduced in 1975. Of this new survey it was written in the 1976 Annual Report: “This is a quarterly report based upon the returns received from member companies. The questionnaire used is quite simple and when the replies are collated give an indication of market movements and some basic problems”.

BFPA still carries out quarterly market trend surveys for hydraulics, pneumatics and distributors – these days most companies reply on line!

It was around this time that a new “Market Forecasting, Trends and Statistics Working Party” was set up to look at other statistical projects including: longer term market forecasting, length of credit survey and quarterly invoiced sales and orders surveys.