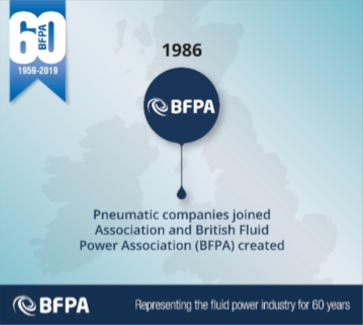 Having been established in 1959 as AHEM (Association of Hydraulic Equipment Manufacturers), a small group of pneumatic companies approached AHEM in 1985 to discuss the possiblity of joining the association on the condition that there must be a change of name. The Chairman of AHEM at the time, Brian Newman, recently recalled “I was Chairman when we attempted to change the association’s name at an AGM from AHEM to either AHPEM (Association of Hydraulics and Pneumatics Equipment Manaufacturers) or AFPEM (Association of Fluid Power Equipment Manufacturers) after we had invited pneumatic companies to join us. Both resolutions were defeated during that eventful meeting! Subsequently BFPA (British Fluid Power Association) was accepted at an Extraordinary General Meeting on 11 June 1986”. 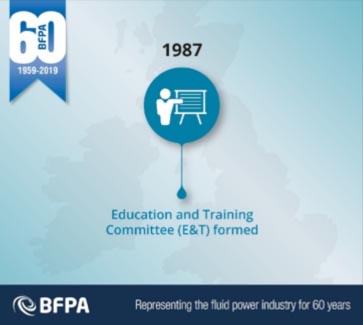 As early as 1961, education and training requirements were first mooted with a proposal to organise a lecture course in hydraulics. This didn’t come to anything but the following year an Education Sub­Committee was formed following the introduction by the Institution of Mechanical Engineers of a new syllabus on oil hydraulic engineering to be adopted by technical colleges. In 1965 it was agreed to give assistance on courses for designers, draughtsmen and service engineers. These developments did not receive the total support of the Association and activities remained low key until 1986 when a new initiative was proposed by the Executive Committee. An initial meeting was held in February 1987nd a new Education and Training Committee formed.

Under the Chairmanship of Peter Jukes the Committee agreed to establish the training needs of the industry, to publish guidelines and disseminate information and, most importantly, to develop a structured approach to achieving certification in technical skills.

John Savage of North Notts College took over the Chairmanship of the Committee in 1991 on the retirement of Mr Jukes and its success is such that it is still a thriving BFPA committee, with its most recent work being the development of Minimum Educational Training Recommendations for fluid power.