1961 – First Dinner and Ball at The Dorchester

The very first Annual Dinner and Dance was held at The Dorchester, London on Friday 17 February 1961 with Bryn Williams present as the original Toastmaster, and the then AHEM had its “own exclusive suite and band”. In the minutes of the Meeting of the Executive Committee on 22 March 1962, the following note can be found:

“The Director reported that the First Annual Dinner and Dance of the Association held at the Dorchester on 17th February 1961 resulted in a financial loss of £11. 7s. only. This loss was consequent upon the instructions of the Policy & Finance Committee whereby the Association paid the cost of the liqueurs and cigars; otherwise there would have been a profit of £9.19.6d.”

Records show that the Annual Ball has taken place at the Dorchester 53 times with the last being held in 2015. The BFPA Ball became established as the key industry social event and in many years more than 400 guests enjoyed a reception, dinner and cabaret entertainment followed by dancing until the small hours. The plan is to return in 2019 to celebrate the BFPA’s 60th Anniversary Year (see the BFPA website for more details and to book a table!) www.bfpa.co.uk/events 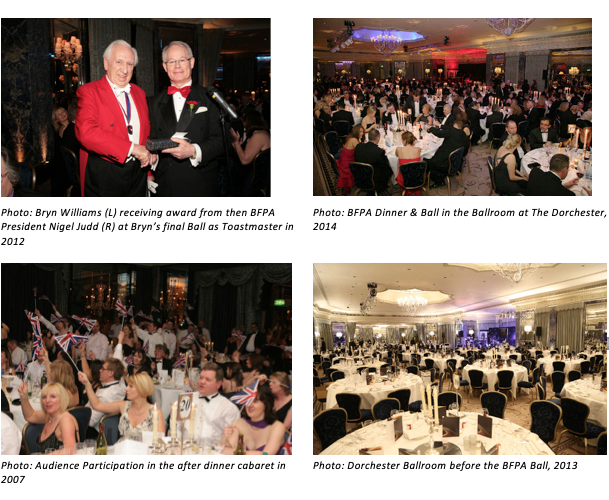