It is with sadness that BFPA has learned of the passing of Edward (Ted) Dowty on 7 March 2021. 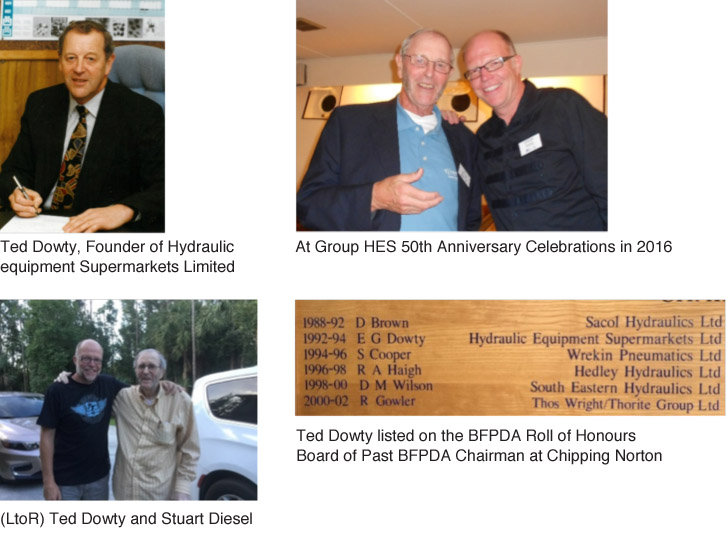 Edward “Ted” George Dowty, 81, was born on May 19, 1939 in Blackpool, England and sadly passed away on March 7, 2021 in Jupiter, Florida. Ted attended and graduated from Dean Close High School and then went on to do an Engineering apprenticeship at de Havilland.

Ted Dowty will be remembered in the UK fluid power industry as one of the founder members of the British Fluid Power Distributors Association (BFPDA). BFPA’s records show that Ted Dowty, representing his company at the time Hydraulic Equipment Supermarkets Ltd (now Group HES and part of Flowtech Fluidpower plc), attended one of the first formal “BFPDA Council” meetings on 11 March 1988 at Chipping Norton, and served as BFPDA Council Chairman from 1992-1994.

The formation of the new BFPDA group of companies led the expansion of BFPA’s membership and the creation of many of the excellent initiatives we still have today, such as the “Hose Certification” scheme – now called the “BFPA Approved Hose Assemblies Scheme”.

Stuart Diesel, former owner of Group HES, recently shared some thoughts and memories with BFPA on the very strong relationship he built with Ted, one based on mutual respect and trust:

“Whilst unashamedly “a non techie” as he would put it, he was no doubt way ahead of his time as a progressive and innovative practitioner in the art of industrial distribution. He embraced innovation and technology and, in the days when it was possible, distributed a range of products that read like a who’s who of hydraulics. He was a keen seals man and, to the best of my knowledge, owned the first Seal Jet (2 of them) in the UK. Ironically I heard him, on many occasions, ticking people off for calling it a “Dowty Washer” rather than a bonded washer!”

Stuart continues: “The megamatts in the Gloucester site were his brainchild and, again to the best of my knowledge, he also published the first comprehensive priced catalogue of products in the UK. Sadly he never pushed on with this great concept and regretted this when he saw the remarkable growth and performance of Flowtech, who now own the business. He greatly admired their achievements in this regard.”

“It is impossible to describe the full depth of the opportunity he presented to me and the risk he took when he sold the business to me in 1999, and for this I will remain forever grateful. The word Legend is used somewhat liberally nowadays, but in the context of fluid power distribution in the UK I can assure you Ted is way up there. RIP Ted Dowty.”

Ted and Barbara married on April 23, 2005 and spent almost 15 years together. He was a devoted husband to Barbara, father to Ben and Emma, father in law to Nick, stepfather to Josh and Sarah, grandfather to Will, Georgia, Isla, Maeyun and Penelope and uncle to Tim. He will be missed by many.

A Celebration of Ted’s amazing life will take place in Cheltenham later in the year when COVID restrictions are lifted and a family memorial service will also be held in December, in Florida, when international travel is permitted.

BFPA has sent its condolences to the family on behalf of the industry.