An opportunity to engage or a Government scheme to pass its responsibilities onto the private sector?

BFPA CEO Chris Buxton reviews the function and role played by the Local Enterprise Partnerships in helping industry at a more local level and the funding opportunities that they present.

The tensions between central Government policy, (driven in the main, by civil servants from Whitehall), and the local impact that such policy has upon what are often rural communities in remote and in some cases, depressed areas of the UK, are well recognised. The much claimed disconnect between the two communities has been the ‘stuff of political elections’ for decades. Indeed, many argue that the result of the recent EU referendum could be attributed to a protest vote from those that felt that Whitehall had ‘lost touch’ with the wider population beyond the confines of London, the South East and other predictably affluent areas. This debate is not the subject of this paper but the fact remains that there has always been a ground swell of opinion that decentralisation of Government and a network of local authority, in whatever form it takes, is generally well received by most communities.

The level of autonomy enjoyed by such authorities and the form that it takes, depends very much upon the Government of the day and perhaps most importantly, the health of the economy. Inevitably, it is the latter that tends to determine the funds that are made available for more local initiatives. In recent years, dwindling government funds and the ever increasing burden being placed upon them have led to a plethora of what might be termed ‘creative’ contracting means such as the Private Finance Initiative (PFI), later to evolve into the Private Public Partnership or PPP. Upon closer examination of these models, the more cynical eye would say that they were an inevitable attempt by an under-resourced Government to pass the burden of funding and even the risk associated with the commercial success or failure of a local project onto the shoulders of the increasingly burdened private sector. The Government case for doing so was of-course, one of self-determination and potential profit for the companies with whom they engaged. Sadly, all too often, it led to a price war at tendering stage and the long term decay of service quality whilst brow-beaten middle management and project leaders struggled valiantly to make an under-priced contract profitable over what could be 25 year agreements.

But aside from the decentralisation arguments and the cut and thrust of Government contracting, it has long been recognised by all parties that some form of network with nodes that have a local focus and responsibility for their own community is a good thing.

The first tangible manifestation of this concept was introduced in 1998 with the creation of the Regional Development Agencies or RDA’s. In the United Kingdom, regional development agencies (RDAs) were nine non-departmental public bodies established for the purpose of development, primarily economic, of England’s Government Office regions. There was one RDA for each of the NUTS (Nomenclature of Units for Territorial Statistics), regions of England. (See adjacent map)

Similar activities were carried out in Wales by the Welsh Government Department of Economy and Transport, in Northern Ireland by the Department of Enterprise, Trade and Investment and in Scotland by Scottish Enterprise and Highlands and Islands Enterprise. They were funded from HM Treasury via six different central government departments of the day:

Unfortunately, the performance of these Agencies was very variable. Some; most notably Yorkshire and The Humber, branded ‘Yorkshire First’, were very successful and well managed. Others were far from successful and led to much controversy around what was perceived to be a waste of public money. Consequently, in June 2010 the UK government announced the abolition of the RDAs (which actually took place on 31 March 2012), with a view to reducing the government deficit.

On 29 June 2010 a letter was sent from the Department for Communities and Local Government and the Department for Business, Innovation and Skills, also to local authority and business leaders, inviting proposals to replace regional development agencies in their areas by 6 September 2010. On 7 September 2010, details were released of 56 proposals for local enterprise partnerships (LEP’s), that had been received. On 6 October 2010, during the Conservative Party Conference, it was revealed that 22 had been given the provisional ‘green light’ to proceed and others might later be accepted with amendments. 24 bids were announced as successful on 28 October 2010.

Consequently, Government would claim that the RDA’s were replaced by a new vehicle known as the Local Enterprise Partnerships or ‘LEP’s’. In practice, they were not so much a replacement as a new concept as they differed from RDA’s in one crucial way – they did not receive any funding from central government and local councils to whom responsibility for their success fell, did not receive an equivalent injection of income from central funds, having been called upon to make savings and support similar initiatives.

To this extent, the pioneering LEPs were set up on a volunteer basis without any public funding and struggled to make progress. A much discussed report by Michael Heseltine in October 2012, “No Stone Unturned”, was largely accepted by Government, and proposed delegating funds from central government to LEPs, including:

Thus, the Local Enterprise Partnerships as they exist today, were born. They are described as; “voluntary partnerships between local authorities and businesses set up in 2011 by the Department for Business, Innovation and Skills to help determine local economic priorities and lead economic growth and job creation within the local area.”   To this extent, they provide opportunities for local funding initiatives by companies looking to develop their businesses whether it be through increased recruitment, filling skills gaps or developing new products and services.

The first LEP’s to become established were, Greater Birmingham and Solihull, Greater Manchester, Leeds City Region, North Eastern, Sheffield City Region, and West of England. They were included in the first wave of what were called ‘city deals.’

Four years later, there are now 39 active LEP’s in operation. They are listed (with links), in Appendix One of this document.

Since its inception in 2012, the LEP network has evolved extremely fast. Service delivery is now achieved through what are termed Growth Hubs. Each LEP has an associated Growth Hub thus there is a Hub-network of 39. Growth hubs are local public/private sector partnerships led by the Local Enterprise Partnerships (LEPs). They join up national and local business support so it is easy for businesses to find the help they need. They are, if you like, the first port of call for businesses. 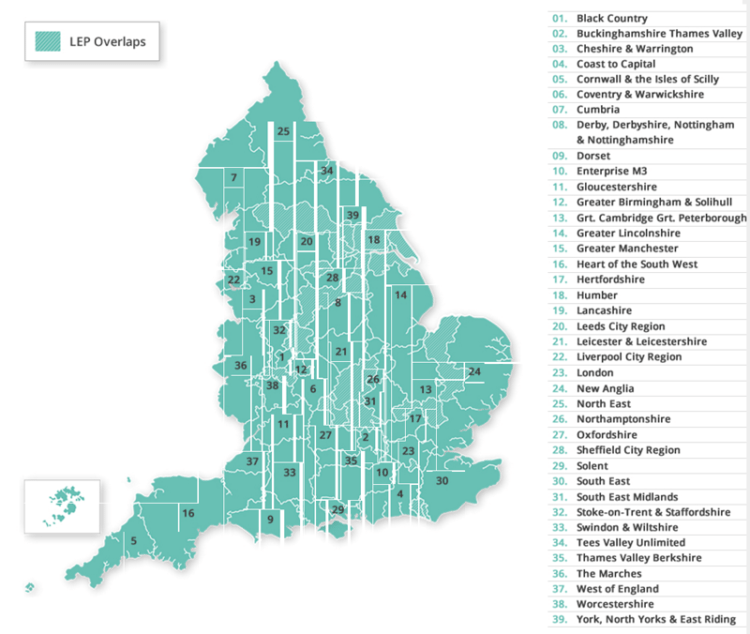 Each of the Growth Hubs and their associated LEP has a strategic plan for their region all of which can be found along with a great deal of helpful information regarding how to approach them, on the LEP Network website.(www.lepnetwork.net) The Growth Hub represents the doorway for companies seeking to engage with their LEP. All contact details for each Growth Hub are also available on the LEP Network website.

Any company exploring the LEP network should also be aware of the Governments portfolio of Economic Zones.

Enterprise Zones are designated areas across England that provide tax breaks and Government support.  To this extent they are very attractive places to do business especially for both new and expanding firms.

Also established in 2012, Enterprise Zones are claimed to be at the heart of the Government’s long-term economic plan, helping businesses to grow. Since starting in April 2012 they have laid down the foundations for success for 635 businesses, attracting over £2.4 billion pounds of private sector investment, attracting nearly 24,000 jobs. The success of the programme led to more Enterprise Zones being announced in the Autumn Statement in 2015 and in the March 2016 Budget. Up to 48 Enterprise Zones are currently planned to be in place by the beginning of April 2017.

Businesses that locate on an Enterprise Zone can access a number of benefits:

Businesses that locate on sites from the first round of Enterprise Zones must have done so before March 2018 to be able to access business rate reliefs. For new Zones starting in April 2016, they will need to have located onto the Zone before March 2021 to qualify.

On EZ sites where enhanced capital allowances are available (assisted areas), businesses now have up to eight years from the launch of the EZ to make their investment. Businesses thinking about locating to an Enterprise Zone can also find more information about investment opportunities at the Local Investment Showcase website.

Enterprise Zones are establishing themselves as the driving force of local economies as they unlock key development sites, consolidate infrastructure, attract business and create jobs.

In addition, the Government is committed to working actively with Enterprise Zones to help to unblock any barriers to delivery, such as Department for Transport support on transport infrastructure, Defra support on addressing environmental issues and UKTI advice on marketing Zones to international investors.

In April 2016 the Government announced that the Enterprise Zone network was going to be augmented with two further zones meaning that there will be 48 EZ’s by close of play in 2017.
The breakdown of the EZ network is provided in Appendix Two of this document.

On the 11th of August, the new Business and Energy Secretary Greg Clark underlined what he described as the vital role of local growth and the importance of ‘place’ in developing and delivering the government’s comprehensive industrial strategy during a visit to Belfast.

For the first time, all ministers in the Department for Business, Energy and Industrial Strategy (formally BIS), will act as local growth champions across the United Kingdom and will be tasked with building relationships with a number of Local Enterprise Partnerships (LEPs).

Ministers will also engage with businesses and local leaders in the devolved administrations in Wales, Scotland and Northern Ireland, and will act as a first point of contact for respective LEPs in England within the Department for Business, Energy and Industrial Strategy.

This would suggest not only increased Government commitment to the local growth initiatives and the LEP Network but also that MP’s may become an alternative ‘doorway’ into engaging more effectively with the LEP or more specifically, the Growth Hub network.

The list of allocated Ministerial responsibilities is provided in Appendix Three of this document.

(Digital readers may make use of the live links embedded in this appendix. [Highlighted in blue])

* These zones have been granted extensions.