BFPA CEO Chris Buxton invites members and colleagues to seize an opportunity to have their views heard by the Government Brexit Negotiation teams.

BFPA Members will know from previous editions of this bulletin that BFPA is a founder member of the EURIS Taskforce. (An unbiased alliance of engineering trade associations convened to engage with Government during the BREXIT process to optimise the outcome in the best interests of our sector and industry as a whole http://www.euristaskforce.org/about-euris/)

Discussions with Government have been going very well and we have now secured their confidence. Consequently, we have been asked by the Department of Business, Energy and Industrial Strategy (BEIS) to recruit a small number of members for a EURIS Sector Panel/Brexit Consultation Group.

This body will provide a forum for strategic engagement between government and the industrial product supply sector for the future economic partnership between the UK and the EU. BEIS would like a consultative / advisory panel to be established prior to negotiations with the European Union on the Future Economic Partnership. The Panel is likely to play an important role as a sounding board for Government as the negotiations begin. The creation of this group is a real opportunity for BFPA members to ensure that our voice is heard at the negotiation table. The proposed model will have two facets to it – a primary panel and a BFPA sector-specific panel or forum. Each member of EURIS (EURIS has 12 trade association members), will be putting forward one member company representative from the sector-specific panels to sit on the Primary Panel/Brexit Consultation Group.

In selecting these members, we will ensure that the industrial product supply sector is fully represented with a spread of SME’s and multi-nationals, importers and exporters and a range of experience and knowledge from those individuals sitting on the Panel. In effect, we are therefore creating our own BFPA consultation group of member companies from which a representative will also sit on the primary panel and convey the views of all BFPA contributors to questions and answers from the negotiation teams as they arise. 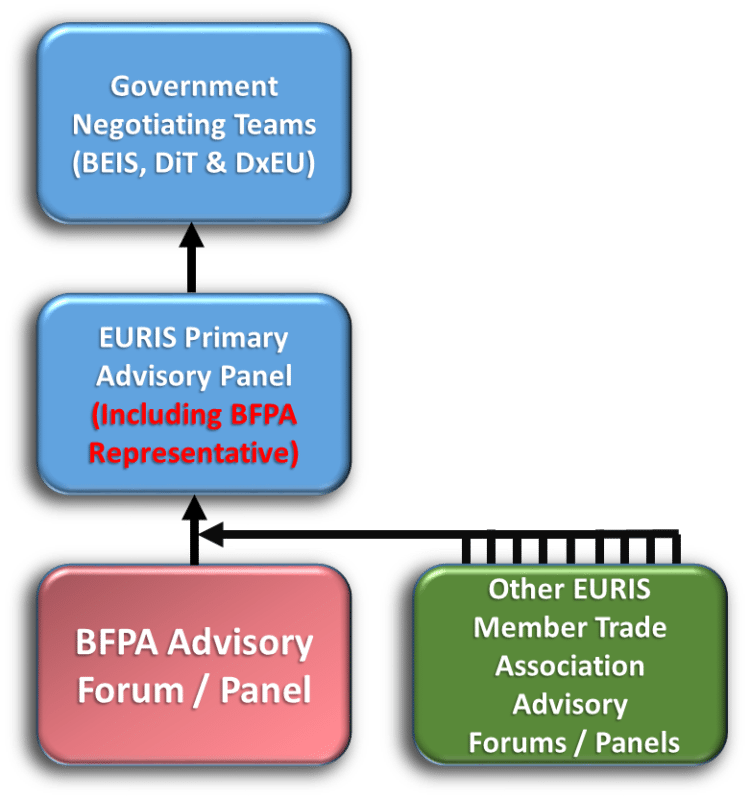 Unless you are the representative on the Primary panel this should not be too time consuming but will provide you with an opportunity to electronically comment upon and stay abreast of the BREXIT negotiations. Like so many Government requests – the timescale is short – not just because Government departments tend to make last minute decisions but because time is running out for the negotiation teams! Any members interested in being involved in this initiative, should contact Chris Buxton as soon as possible on either chrisbuxton@bfpa.co.uk or 07787-400747.

Any BFPA member can choose to be on the Sector specific BFPA panel / circulation, but it would obviously be helpful if interested parties have some understanding of some of the most significant areas likely to be covered in the negotiations and be able to respond fairly swiftly to requests from Government as they arise.

In terms of an overall time-scale, we expect the group to be most active from October – December 2018, further to an initial first meeting in September 2018. This initiative is non-partisan so it is potentially of benefit to both ‘Remainers’ and ‘Leavers’ so we look forward to hearing from both member communities!

Following the publication of this White Paper, EURIS has had confirmation in writing from BEIS that CE marking will still be used/recognised in the UK during the Implementation Period (so until 31st December 2020). The question was raised by a Trade Association and put to BEIS further to the publication of the attached paper which (on pages 25-44) indicates that EU rules and regulations will continue to apply until the end of the Implementation Period.

BEIS have confirmed that they hope to publish something explicit on this and Notified Bodies soon – and we will keep you updated on this.