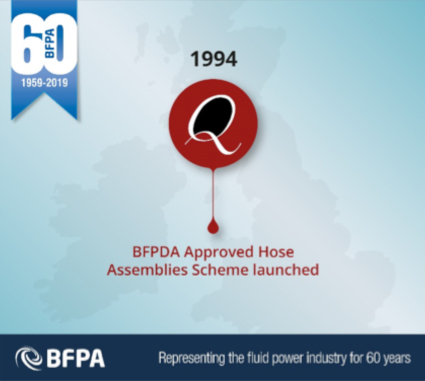 Members may achieve accreditation only after a detailed inspection process. Companies must be able to demonstrate that they adhere to all current legislation in respect of the supply, storage and handling of hoses which can be hydraulic or pneumatic. After approval they are entitled to display the ‘Q-Approved’ logo on their premises and products. Scheme member companies also agree to a detailed technical audit by the BFPDA every two years.

The scheme is constantly being improved and developed and it now has its own dedicated website www.hydraulichosesafety.co.uk where an interactive map highlights the location of all the approved members so that end users can select a provider nearby.

1997: Agreement with BSI for BFPA to administer MCE/18 technical committee 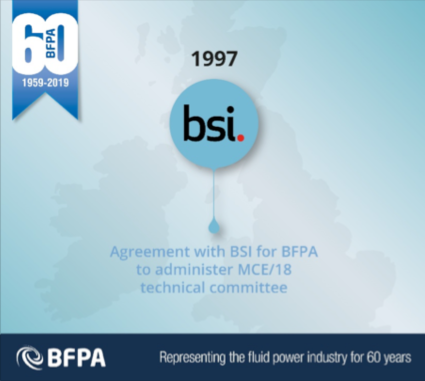 In 1997, BSI awarded the BFPA a contract to act as an external secretariat after all the fluid power standards development work on behalf of the British Standards Institution (BSI) with responsibility for over 500 standards within MCE/18 (Mechanical Engineering). Since then, BFPA has continued to provide secretariat support to the BSI for fluid power through the work of its numerous technical committees, which are made up of voluntary technical experts.

This valuable technical work, currently ably administered by Yvonne Pearman, BFPA Standards Project Manager, sits at the very heart of what the BFPA, as a full service Trade Association, offers the fluid power industry, and benefits both members and non-members alike.